As part of being a poor film maker I use a very inexpensive camera. It has some limitations but I work around them. Here is my camera. 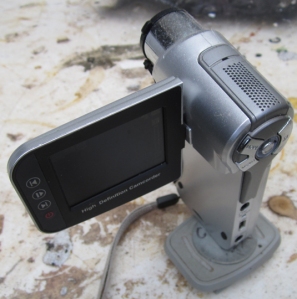 It is very inexpensive. I think I paid $99 for it a few years back. This is the tech spec sheet. 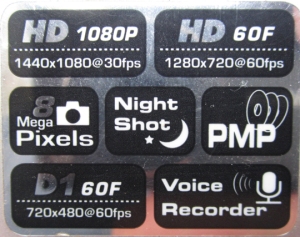 So, it shoots in HD at 1440×1080. That is what I shoot at. So, when you use a cheap camera it has some limits. The first one is cheap cameras do not do very well in dark light. To combat this, almost all of my shots are done in bright sunlight. This is part of working around the limitations.

The next thing is the zoom. It has some sort of zoom on it, but I never use it. I am pretty sure you lose quality when you zoom on a cheap camera. I just move the tripod. 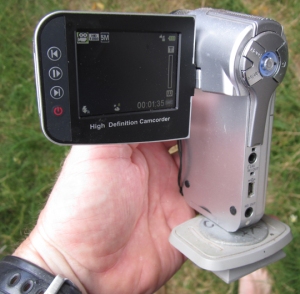 Another thing a cheap camera does really poorly is sound capture. I never use the onboard microphone on my camera. The sound would be horrible. My sound is done separately and so should yours. I use a separate system for sound. I will talk about that later.

So, my camera works for me. It is very cheap. Your Iphone or Ipad probably shoots better video. The point is, use what you have, use what you can afford. If you can get a really nice camera, then by all means do it. But if not, a cheap camera should not prevent you from making a film. Avoid dark lighting situations, put it on a tripod, don’t zoom, don’t use the onboard microphone.

Go ahead, make a mess, have some fun.

This entry was posted in Uncategorized. Bookmark the permalink.

2 responses to “Using a cheap camera”